Sidney City Schools had a longstanding history of failing operating levies. But in 2021, local leaders, district administrators and Fanning Howey collaborated to create a levy campaign that passed with 57 percent of the vote. How did they do it? In this Q&A, Tiffany Rank, Communications Coordinator for Sidney City Schools, shares some of the modern engagement techniques that led to success.

Provide some background on the history of levies for Sidney City Schools. What was the context and what were the communication challenges?

The Sidney community is a mix of industry and agriculture, so we have a diverse constituent group: blue-collar, white-collar, young professionals, retirees, etc. Given the diverse community demographics, it’s been hard to pinpoint why our levies have failed in the past and what we could do to pass in the future.

We have only ever had success passing property tax levies in the past, but we were the only school in our county to NOT have an income tax levy. With that knowledge, last year, our board decided to try for a 7.3 mill property tax levy that would bring in about $3.5 million each year. I was fairly confident we would pass that levy on the first go-round in March. Then the pandemic hit, and it got very confusing for voters. That levy failed by about 400 votes. We tried again in August and November and each time we failed.

When looking at the voter data, we learned that we had the yes votes out there, but voter apathy was a huge problem. How do we motivate the voters to actually vote?

The other piece of the puzzle was what we were asking for and to whom it mattered.

Of the people who voted in the last three elections (March Primary, August Special, and November Presidential General), more than 60 percent of our voters were 65 years of age and older. We heard repeatedly that seniors on a fixed income could not afford a property tax increase. Further conversations with local leaders showed that senior citizens would also have a hard time supporting an income tax. As a result, our Board put a .75% Earned Income Tax Levy on the ballot for the May 4, 2021 primary.

You took a unique approach to community engagement during the levy campaign. What was that approach, and what worked particularly well?

Our approach involved three critical pieces: Influencers, Business Community Support and Get Out The Vote.

As we started to work through a plan with some local leaders, district administration, and Tim Hamilton from Fanning Howey, we looked to the traditional levy model of chairs, co-chairs and committees. Everyone involved was tasked to bring some names to the table to fill these roles, but what we found was many of the candidates had influence in various spheres. Jamie was recently retired from the banking industry with all sorts of community connections. Tom was a younger empty nester who, with his wife, is heavily involved in the community and very supportive of the school district. Dave was a former educator and administrator who recently retired from being the director of the local senior center. Greg was a young professional with kids in the district. The list went on. While they all had something to offer and were great leaders, it seemed the best thing they could do was influence people within their circles, hitting their own demographics. 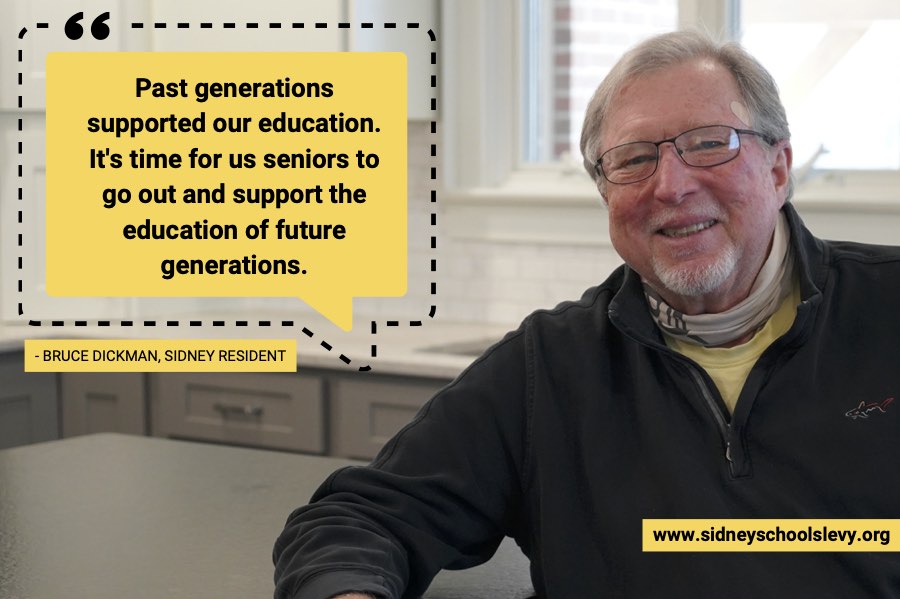 And so came about the Influencer Model.

We separated our voting demographics into four age segments and identified their characteristics:

We invited 50+ people to be influencers. Their job was to talk to people in their circles about the levy, share information and encourage folks to show up early and vote yes. We met with our influencers in person a couple of times, but communicated with them regularly. We provided them with the full FAQ document and armed them with some quick facts.

We also solicited feedback for targeted messaging from these influencers. We asked them to help craft what message resonated with their key demographic. So for seniors, one message was that the Earned Income Tax won’t cost you anything if you’re not currently earning an income. For the empty nesters and the school-age parents, it was about community investment, creating the kind of community you are proud of and supporting our children. And for the recent grads, the message was about supporting the school you’re proud of.

As we built out the Influencer part of our strategy we also we had gained immense support from our local business leaders. The Sidney-Shelby Economic Partnership, in their strategic plan, had identified school success, particularly related to school funding, as one of the prongs of economic development in our community. They had approached the district about what they could do to help promote our levy to get it passed. What came of that initial meeting was something quite extraordinary.

First, SSEP helped solicit funds and make the case for strong schools/strong community within the business community. The business community collectively supported the levy at well over $35,000. We would not have been able to generate those funds without their partnership. Combined with the $15,000 school district employees had contributed, the campaign was well-funded. And a well-funded campaign means money to market.

To that end, SSEP helped facilitate a full spectrum marketing plan with local marketing professionals to share the message with:

GET OUT THE VOTE

While we had successfully engaged the community and gained the support of local businesses, a few of our influencers felt a sense of real urgency to see this levy successfully to the finish line and had a plan to do so. Really diving into what we discovered with last year’s voter turnout trends, these guys knew we had the votes but also knew that we really needed to consistently remind folks to vote.

Our staff, our 50+ influencers and 20-30 other additional individuals scrubbed the list of registered voters from the past three elections to identify potential positive voters. (As we moved forward with marketing efforts, we started to use this list to only hit our potential positive folks with targeted mailings.)

As we identified potential positive voters, each influencer was encouraged to claim 15-20 people. To go a step further, the influencers were also encouraged to ask some of those people to help in the levy campaign efforts. What essentially formed was a pyramid scheme to ensure people voted.

By the end of the process, we had identified 3,000+ people we were confident would vote yes. Of those 3,000, we had 2,100 claimed.  Prior to early voting starting, the influencers were asked to share early voting information with their people. They also received a weekly update on early voting numbers and were encouraged to check the list regularly to remind their folks to vote.

Going into Election Day, we knew we had a solid 500 vote lead, with a number of the unknown votes belonging to folks who were 65+, a REALLY positive sign.

What were the final results?

All of this – Influencers, Business Community Support and Get Out The Vote – took a ton of coordination, communication, and effort but with a result of 57.45% for the levy and 42.55% against, there was no disputing that we had all the right things in place.

I don’t know that we would have yielded the same results if any one of these three things was our only focus.

Certainly, Tim Hamilton’s guidance, Fanning Howey’s ability to help break down voter data, and the general willingness to help with anything along the way made things much easier.

Were you able to reach constituent groups that you hadn’t in the past?

I don’t think there’s any one group we reached that we hadn’t reached in the past but the method by which we reached them was unique. Our influencers already had the trust of those they were talking to. It wasn’t the school district telling people the facts, it was friends, coworkers, fellow parishioners, etc. sharing the message in conversations. After a year of social distancing, no mass gatherings, masks and other barriers, human connection is more necessary than ever.

How can other school districts learn from the success of Sidney City Schools? What lessons can they apply in their own districts?

I think other school districts can look at Sidney and realize sometimes it’s okay to throw out the manual and go your own way. The traditional campaign structure was not working for us and even with the other elements we had in our favor, it still would not have worked.

Networking and buy-in are also incredibly important. While we’re still basking in the afterglow of a successful campaign, I know how important it is to maintain the relationships we’ve developed with SSEP, the business community, and our influencers. Ongoing communication with them is important to maintaining their investment in our success.

Education leadership is essential for the future of our students, school districts and the country at large. Understandably, educators and administrators are often focused on the day-to-day challenges of running a school district. However, leaders

In the early days of my career, school boards and superintendents were more or less trusted by their communities to make decisions about constructing and renovating their buildings. Voter referendums on bond issues passed routinely

Passing a bond issue is often required by school districts to generate the revenue needed for facilities improvements, but today’s voters require strategic community engagement to turn out in favor of a referendum. Before pursuing